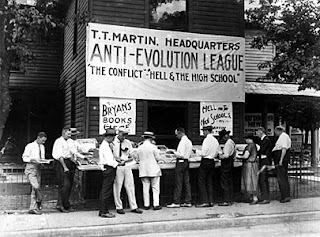 The 1925 scopes trial was a famous trial that challenged teaching evolution in schools. A biology teacher in Tennessee named John Scopes was charged for teaching evolution in school, supposedly breaking state law. A key reason as to why this case was so famous was because lawyer Clarence S. Darrow gave such a powerful, hard-hitting defense.
Sternly he insists that William Bryan's claims that teaching evolution is against the law is simply ignorant. He says "I am going to begin with the simpler reasons why it is absolutely absurd to to think that this statue, indictment, or any part of the proceedings in this case are legal; and I think the sooner we get rid of it in Tennessee the better for the people of Tennessee, and the better for the pursuit of knowledge in the world". He believes that rejecting evolution as a defense for the freedom of Catholicism is ridiculous as the book of Genesis was written during a time when people believed the world was flat. It is important to acknowledge the progress that science makes and not be held back by religion.
Bryan followed the belief that "to teach that theory denies the story of the divine creation of man as taught in the Bible, and to teach instead that man has descended from a lower form of animal."  A lot of what is in play here, in my opinion, is ego. Man feels that he has a superiority of the earth - Catholicism does not encourage partnership, connection and oneness with the earth - instead it propels a mindset of dominance in which humans are heaven-sent and animals are not. Evolution is a huge blow the the catholic ego. Jennings whole defense hinged on the hysterical disagreement that man descended from a "lower form of life" (whatever that means - for I believe animals are equal and people need to humble the heck down). He says that it isn't fair that these tested scientific theories can be taught but by the law the bible can not.
Ultimately Bryan won the trial and a law prohibiting the teaching of evolution stayed in the books in Tennessee until 1967. Crazy world.

Brown v. Board of Education of Topeka, 1954A change in education forever...
In the case of Brown v. The Board of Education was a decision that changed education forever. Linda Brown, a black student from Topeka, Kansas was forced to attend a segregated school that was far from her home because she could not attend the "white" school that was near her home. She fought the Board of Education and argued that segregation is unconstitutional because it denied students "equal protection o the laws." The segregated schools did not have the same quality teachers and schools that the "white" students had. On May 17, 1954 the Supreme Court ruled that "separate but equal" was not equal and had no place in education. This was a triumph for the NAACP and changed schools forever by integrating them.

"The plaintiffs contend that segregated public schools are not "equal" and cannot be made "equal," and that hence they are deprived of the equal protection of the laws." 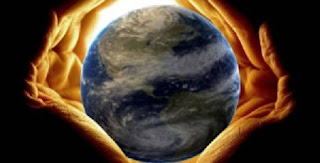 Due to an oil leak in 1969 caused by a drilling installation in California, the United States of America created the Declaration of Environmental Rights. The Declaration declared that people need to respect the environment that surrounds them. If people do not have respect for the environment it will disappear and we will not be able to survive.
"We need an ecological consciousness that recognizes man as member, not master, of the community of living things sharing his environment." I choose this quote from Hofstadter because it reminds people that they are a part of the environment. That they need to respect their surrounds because if they don't, one day it will be gone.