Between 1980 and 1988 Iran and Iraq were involved in a war with each other also known as the Persian Gulf War. During the war Iran found it difficult to find nations in which to supply them with weapons in which they needed to win the war. Between 1982 and 1992 the Islamic fundamentalist group, later identified as the Hezbollah, kidnapped over 100 hostages from multiple nations and killed 230 Americans in the Embassy Bombings in Beirut. This was known as the Lebanon Hostage Crisis. The reason for the hostages may very well have been to protect themselves from retaliation of the United States or other countries. The Israeli government supported the Iraqi’s during the war and was willing to supply them with weapons as long as they could be reimbursed from the United States. The controversy began when the Reagan administration officials began to secretly sell weapons to Iran. The plan was that Israel would ship weapons to Iran and then the United States would reimburse Israel and receive their payment. When the Iranians were receiving the weapons they promised to attempt to do everything in their power to get the American hostages released from a terrorist group that was tied to Iran. This changed to an arms-for-hostage scheme in which the government sold weapons to Iran for the release of American hostages. The hostages were sparatically released when the Iranians received the weapons in which they wanted. When America received their payments proceeds of the money went to funding Anti-Sandinista and anti-Communist rebels in Nicaragua. This part of the plan was created by Oliver North who was a member of the National Security Council. Funding the Contras in Nicaragua was illegal as part of the Boland Amendment.

On March 4th, 1987 President Ronald Reagan made a speech to the American public about the controversy with Iran and the release of the hostages held by the Hezbollah.

“But I’ve had to wait, as you have, for the complete story. That’s why I appointed Ambassador David Abshire as my Special Counsellor to help get out the thousands of documents to the various investigations. And I appointed a Special Review Board, the Tower board, which took on the chore of pulling the truth together for me and getting to the bottom of things.”

Reagan discusses how he believes that America deserves the truth about the tragedy with the hostages and the controversy of selling weapons to Iran. Reagan was said to not have known about this controversy until it was shown to the public.

“First, let me say I take full responsibility for my own actions and for those of my administration. As angry as I may be about activities undertaken without my knowledge, I am still accountable for those activities.”

While trying to regain trust from the American people with this statement he admits to lying to them about not trading arms for hostages. The entire controversy revolves around this concept along with the money that was sent to fund another war that we weren’t actually part of. He believed that selling the Iranians arms was a strategy in order to accomplish other goals but in fact it turned into an arms-for-hostage strategy, which is not what they had in mind.

“It’s clear from the Board’s report, however, that I let my personal concern for the hostages spill over into the geopolitical strategy of reaching out to Iran.”

This was critical because of this scandal the United States needed to make sure they did everything possible to release these hostages but in a legitimate way. Reagan also promised the loved ones of these hostages that they would explore every possible avenue to rescue these hostages. On the other hand, suspiciously though the Board was unable to find any information about the money controversy.

“The Tower board wasn’t able to find out what happened to this money, so the facts here will be left to the continuing investigations of the court appointed Independent Counsel and the two congressional investigating committees.”

Though he is willing to again take responsibility for these actions in which occurred it is strange to see that they were unable to find any information about the money. It is possible that Reagan did know what was happening and told the officials in his administration to destroy the evidence, but we will never know. Unfortunately American hostages were killed though many were released it is a great lose for the American people that we were unable to save our hostages from harm. The last American hostage was released on December 4th 1991; while the sad return of the last two deceased American hostages were returned late in December of 1991. 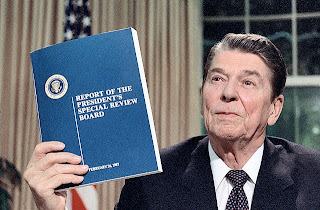 Ronald Reagan was in the middle of running for the governorship of California in the mid 1960's when the free-speech movement was going on in the United States. Reagan saw this as an issue with American society stating, "its charges that the campus has become a rallying point for Communists and a center of sexual misconduct." When discussing the issue in his campaign speech, Reagan made sure to express that our society has driven off of its rightful course and have taken a path of wrong. Reagan believed that these rallies, riots and filthy-speech movements (as he called them) were getting out of control and there was nobody that was putting an end to it. You had students protesting and speaking out for free-speech, civil rights and speaking out against the Vietnam War.

When trying to make his point to the American people, Reagan used the example of a school dance, where the only lights that were on were those coming off of the projector screens. He goes on to state, "Three rock and roll bands played simultaneously. The smell of marijuana was thick throughout the hall. There were signs that some of those present had taken dope. There were indications of other happenings that cannot be mentioned here." From this statement it shows that Reagan saw free-speech and wide spread love to be morally wrong and not the way a society should be acting. He believed that Americans were being frowned upon for acting in this sort of manner and that it needed to be stopped immediately.

Reagan wanted public hearings to be held for all of those that were involved and they should be made examples of. He also believed that the American people had a right to know exactly what was going in Berkley, California. "The citizens who pay the taxes that support the University also have a right to know that, if the situation is as the report says, that those responsible will be fired, that the University will be cleaned up and restored to its position as a major institution of learning and research."