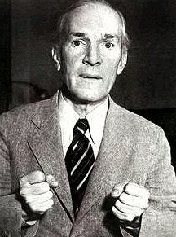 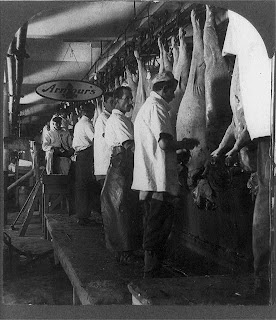 Ever since Upton Sinclair’s, “The Jungle” first came into print in 1906, it has been has been used by generations as a tool to illustrate the corruption of the beef industry in turn-of-the-20th-Century Chicago. No doubt readers have cringed at the torturous descriptions of wailing animals and the spectacle of filthy, disease ridden disassembly lines producing every product imaginable including lard, sausage, glue, and fertilizer. Even President Theodore Roosevelt was shaken by this story and questioned whether-or-not tainted meat products were responsible for deaths in the Spanish American War. The Meat Inspection Act and the Pure Food and Drug Act of 1906 were the result of The Jungle. And although, the book’s notoriety may have made Sinclair famous, the resulting healthier meat products and increase in the number of vegetarians were unintended consequences. 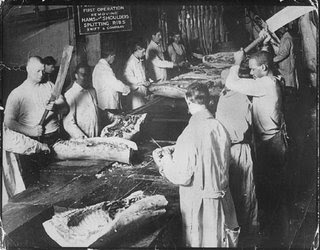 Sinclair’s goal in the novel was to create an awareness of the greater human tragedy of urban slums and the factory systems throughout the world. He once wrote, “I aimed at the public’s heart, and by accident I hit it in the stomach.” For this reaso 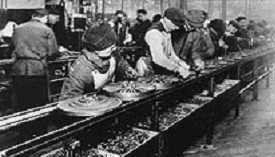 n the book’s effectiveness as a work of propaganda may not have been completely realized.


Sinclair was a Socialist, and his goal from the beginning was to bring attention to the plight of workers. The book was commissioned by the largely circulated Socialist newspaper, Appeal to Reason, with the goal of bringing attention to working-class liberation. He made his intentions clear when he first arrived in Chicago to research for the book 1904 and declared, “Hello! I’m Upton Sinclair, and I have come to write the Uncle Tom’s Cabin of the labor movement.” And although the book is a work of fiction, its content was based on indisputable facts about the awful conditions and corruption dominating Chicago at the time. Only the names were changed to protect the innocent.

Roosevelt sent his own agents to Chicago to investigate whether meat packing was as bad as Sinclair described. The conditions were actually a hundred times worse, the agents reported back.

The president invited Sinclair to the White House and solicited his advice on how to make inspections safer. By June 30, Congress had passed the Pure Food and Drug Act, cracking down on unsafe food and patent medicines, and the Meat Inspection Act. To this day, our hamburgers, chicken patties and other meats are safeguarded by the same law.

Roosevelt was so taken with Sinclair that he coined the term “muckrakers” to describe him and other reformist crusaders, even though the president’s phrase was not meant to be wholly complimentary. 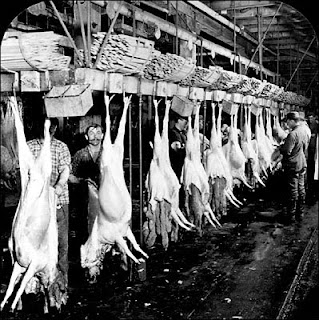 The book reeked with the stink of the Chicago stockyards. He told how dead rats were shoveled into sausage-grinding machines; how bribed inspectors looked the other way when diseased cows were slaughtered for beef, and how filth and guts were swept off the floor and packaged as "potted ham."

In short, "The Jungle" did as much as any animal-rights activist of today to turn Americans into vegetarians.

But it did more than that. Within months, the aroused -- and gagging -- public demanded sweeping reforms in the meat industry.

President Theodore Roosevelt was sickened after reading an advance copy. He called upon Congress to pass a law establishing the Food and Drug Administration and, for the first time, setting up federal inspection standards for meat.

Sinclair used as his prop, an unfortunate and misguided group of Lithuanian immigrants to showcase the inequities of capitalism or the “wage slave” system. The story is seen through the eyes and mind of Jurgis Rudkus, a boldly ambitious young man, who despite his incredible strength and work ethic becomes a casualty of greed and avarice at a place called “Packingtown.” The villains of the story are the American Beef Trust, the corrupt political machine of Chicago, and capitalism altogether.


Rudkus brings with him to America, his aging father Antanas, his young fiancé Ona, and members of her family including her mother Elzbieta. When they arrive in Chicago Jurgis seeks employment in Packingtown, and because of his brawn, immediately finds work to the chagrin of the hordes of onlookers who fruitlessly wait daily for the opportunity of employment within the slaughterhouses and processing factory. Before long the realities of many desperate situations set in, and despite Jurgis’ pledge to “work harder,” the family goes deeper into a cycle of debt and poverty until every capable member of the family is forced to work in deplorable and dangerous conditions for paltry wages. The biggest contributor to their demise was being conned into purchasing a home they could not afford.

Before long, Ona dies in childbirth because they cannot afford a doctor and eventually their only surviving son drowns in a mud hole in a street near their tenement boarding house. In exhausted frustration, Jurgis abandons the family entirely and leaves for life as a hobo in the heartland. Eventually he returns to Chicago where he takes up every means of employment available; from being a criminal to a political operative, which in most cases by Sinclair’s description, are one and the same. His political shenanigans lead him back to Packingtown, where many betrayals leave him unemployed and eventually imprisoned. Ultimately, he ends up as a high risk beggar on the streets where nightly he faces death from freezing or starvation.

One particular evening he went indoors to join an audience listening to a speech, something he did frequently as a way of seeking refuge from the cold. This time, however, he was spellbound by a charismatic Socialist orator whose words seemed to be describing the agony of Rudkis’ travails on a personal level. From that point on, he became a Socialist “Comrade” with his life finally taking a positive turn and becoming all he had hoped for in coming to America. This is the part of the story that was supposed to be the epiphany of Sinclair’s book, that Socialism was the answer to all societal evils. Unfortunately for Sinclair, most reader’s minds were already more fixated about not eating Tubercular beef than on the plights of exploited workers. So, based on Sinclair’s original intent of promoting Socialism, his work of fiction was less effective as a work of propaganda.

There is also much racism in "The Jungle", African Americans hate Latino immigrants, whites get the best jobs, and blacks and mexicans get the jobs on the slaughter house floor, doing the cutting and killing. The descrptions he uses about what goes on in meatpacking plants in 1906 is horrific and appauling. Dead rats, rat poison, feces, dirty water, rust and cigarette butts were dumped in vats with fresh meat to make sauseges and canned meat. It's horrific. That is one reason I've been a vegetarian for nine years.

Is Sinclair's "The Jungle" is Old News?

Steve Mendell, president of the Westland/Hallmark Meat Company, testifying in 2008.

Think that the horrors exposed by Upton Sinclair are just a part of our distant past?  Did the progressive reformers at the beginning of the century solve the problem with 'muckraking' reporting and books like The Jungle?

William Glaberson, "Misery on the Meatpacking Line," New York Times, June 14, 1987.
Charlie LeDuff, "At a Slaughterhouse, Some Things Never Die; Who Kills, Who Cuts, Who Bosses Can Depend on Race," New York Times,  June 16, 2000.


Posted by A. Mattson 0 comments