Abraham Lincoln, the sixteenth president of the United States of America delivered his first inaugural address on March 4, 1861. In this address the president spoke to the South about his proposed policies. He expressed his plans to "hold, occupy, and possess the property and places belonging to the government", he called the Union "indissolvable" to prove that secession was impossible, and he promised never to be the first to attack but to only defend the country against enemies.Lincoln's deepest desire was to see the Union as a whole, rather than seeing it torn apart by the people within it.

"We are not enemies, but friends. We must not be enemies. Though passion may have strained it must not break our bonds of affection. The mystic chords of memory, stretching from every battlefield and patriot grave to every living heart and hearthstone all over this broad land, will yet swell the chorus of the Union, when again touched, as surely they will be, by the better angels of our nature." 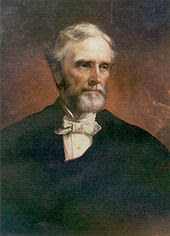 On April 29, 1861, Jefferson Davis called the Confederate Congress together for a meeting in which he discusses the reasons for secession and the theory of the Union. He also asks for permission to ready the defenses of the country after Abraham Lincoln had declared war. His main reasons are based on the North's attempts to abolish slavery and having power in Congress. After the war with Great Britain, he says the states made a compact that said "each State retains its sovereignty, freedom, and independence, and every power, jurisdiction, and right to which is not by this Confederation expressly delegated to the United States in Congress assembled." The Articles of Confederation contained a clause that prohibited changes unless the Legislatures of every State agreed to it, but then the Constitution was ratified on the grounds that only nine states ratified it. Davis thinks the "creature has been exalted above its creators", with the national government being the creature and the States being the creators. He then goes on to defend slavery by saying that "In moral and social condition they had been elevated from brutal savages into docile, intelligent, and civilized agricultural laborers, and supplied not only with bodily comforts but with religious instruction."