Sneaking Out.... of London.

By just reading Elizabeth Sprigs' A Letter to her Father makes me pretty thankful that my parents were very strict about where I am and where I go. If I decided to do what Elizabeth did to gain independence, I would probably feel really stupid about sneaking out. A regular teen would sneak out to go to a party. She sneaking out to a whole other country. The punishment was 10 times more worse than if her parents caught her, because they treated her like crap. I guarantee you that the way her parents treated her were not that bad. I mean, today's world and the 1700's were very different, but sometimes doing things out of rebellion are not worth it; especially to be enslaved in the end.

Bernal Diaz del Castillo wrote the Discovery and Conquest of Mexico in which he describes the relationship the Europeans had with caciques. The caciques had joined forces with Hernando Cortes to defeat the Montezuma and conquer the Aztecs. The caciques were loyal to the Europeans because one day they had been conquered by the Aztecs and they now wanted to get their land back. Bernal Diaz writes that the Caciques offered the Europeans women, friendship, loyalty and treasures. Bernal Diaz explains that the Europeans were not to accept any of these gifts if they Caciques didn't leave their Gods, idos, and sacrifices behind. "[that] When he could see those cursed things thrown on the ground and an end put to sacrifices that then our bonds of brotherhood wold be most firmly tied." To the Caciques these religious sacrifices were sacred and necessary to please their Gods. The tone in which Diaz described the necessity of the Caciques to leave "those idols which they believed in and worshipped, and which kept them in darkness" made the Europeans seem like kind men who were genuinely interested in the well-being of the cariques. In reality the Europeans united with the cariques to obtain as much information about the Montezuma as possible in order to defeat them. Yet, this ambiguous reason to unite with them was just an acceptable reason to conquer the rest of the country, by murdering hundreds of men.
This "acceptable excuse" reminded me of a poem called The White Man's Burden. This poem was written by Rudyard Kipling, during the 19th century when imperialism was acquired by the United States and it describes the social necessity for White men to take on the burden of spreading imperialism to the rest of the "ignorant" world. This "White Man's Burden" gave an "acceptable reason" for white men to kill in order to fulfill their mission, or in other words their "burden" of spreading imperialism to the other countries. It was their responsibility to enlighten their fellow countries, as it was the responsibility of the Europeans to enlighten the Natives into abandoning their lifelong religious beliefs. Whether or not both of these groups of men were right or not, they convinced themselves into believing they were doing the right thing, for the right reasons even if it involved achieving it through the wrong ways like the Europeans did through murder and torture.
Once again this becomes an example of how history gets distorted by hearing it only through one perspective, like in the Columbus story of which we have been reading and writing about thus far this semester. 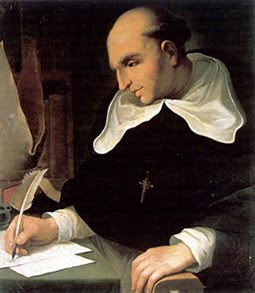 When you hear the name Christopher Columbus, you think of a splendid man who discovered America in 1492, but according to Bartolome de las Casas (pictured left) Columbus wasn't the man we all thought he was. Casas was a Dominican priest who just a few short years after Columbus came to the newly discovered lands. In de las Casas book, The Devastation of the Indies, he describes the horrid acts of violence Columbus and his men performed on the weak natives of the land. According to Bartolome the ultimate goal of the newcomers was to aquire gold and lots of it, and if these natives were unable to meet the needs of gold by the Spanish they would be slain. Some natives attempted to run away in order not to be killed, but Columbus' men were equiped to kill, with their horses, armor, lances, pikes, pifles, crossbows, and vicious dogs. The natives who stole from the Spanish were beheaded right on the spot with no warning. Does this seem like the great Columbus we grew up loving? Some women who would be taken prisoners would be raped and later 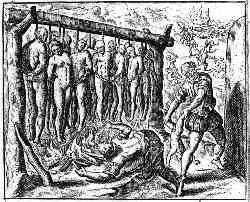 become pregnant, these newborns were thrown into the jungle to die, some older children were given to the dogs for food. Screwed up I know, many other children would die of starvation because of there mothers being overworked and not being able to produce milk for their young. Finally, Columbus created about 340 gallows to be used for the killing of any native who couldn't deliver a certain amount of gold.(pictured right)