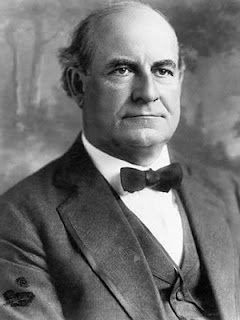 In his speech delivered on December 13, 1898 in Savannah, Ga., democrat William Jennings Bryan expressed his concern about America's increased interest in what clearly resembled the ideology of European Imperialism. He believed the concept of Imperialism to go against the very essence upon what America was based. In his own words:

"The imperialistic idea is directly antagonistic to the idea and ideals which
have been cherished by the American people since the signing of the Declaration
of Independence."

Bryan did not opposed the concept of expansion, as long as there were clear beneficial reason to justify it, such as securing contiguous territory for future settlement. Also, he was in favor of expanding to surrounding areas, but against expanding to remote areas, which he considered impractical.

"The Philippine Islands are too far away and their people too different from us
to be annexed to the United States, even if they desired it."

In this regard, Bryan believed that the issues with Cuba and Philippines should be handled in similar manner. He argued that the best policy was to take possession of this countries only to try to establish a stable government and then hand the government back to their people.

McKinley's Emancipation of the Phillipines 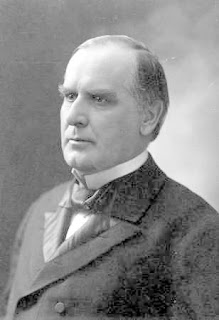 
In President McKinley's speech entitled "Emancipators not Masters" he denounces the claims that imperialism is the United State's motive. McKinley claims that American forces were responsibly standing up for the oppressed people of the Spanish territories. He states " But grave problems come in the life of a nation, however much men seek to avoid them. They come without our seeking... But the generation in which they are forced cannot avoid the responsibility of honestly striving for their solution." In this quotation McKinley admits the responsibility the United States had, and even refers to his earlier opposition of the Spanish-American War.


President McKinley goes on to state that the United State's will aid the Phillipines in constructing a new government. He states " That they (Phillipines) will have a kindlier government under our guidance, and that they will be aided in every possible way to be self-respecting and self-governing people...". This quote really caught my attention because it sounded so familiar. It seems to be the exact message that the Bush administration has put forth in order to justify the continuation of the War in Iraq. In addition to the justifications of the McKinley and Bush administration being similar, so is the criticism of both military efforts. The American occupation of formerly Spanish territories, also draws an uncanny resemblance to the continuing occupation of Middle Eastern territories and both Wars were criticized of having imperialistic motives.

U.S. Grant: An Appeal for the Annexation of Santo Domingo

"I transmit to the Senate, for consideration with a view to its ratification, an additional article to the treaty Of the 29th of November last, for the annexation of the Dominican Republic to the United States, stipulating for an extension of the time for exchanging the ratifications thereof, signed in this city on the 14th instant by the plenipotentiaries of the parties.

It was my intention to have also negotiated with the plenipotentiary of San Domingo amendments to the treaty of annexation to obviate objections which may be urged against the treaty as it is now worded; but on reflection I deem it better to submit to th e Senate the propriety of their amending the treaty as follows: First, to specify that the obligations of this Government shall not exceed the $1,500,000 stipulated in the treaty; secondly, to determine the manner of appointing the agents to receive and disburse the same; thirdly, to determine the class of creditors who shall take precedence in the settlement of their claims; and, finally, to insert such amendments as may suggest themselves to the minds of Senators to carry out in good faith the condit ions of the treaty submitted to the Senate of the United States in January last, according to the spirit and intent of that treaty. From the most reliable information I can obtain, the sum specified in the treaty will pay every just claim against the Re public of San Domingo and leave a balance sufficient to carry on a Territorial government until such time as new laws for providing a Territorial revenue can be enacted and put in force.

I feel an unusual anxiety for the ratification of this treaty, because I believe it will redound greatly to the glory of the two countries interested, to civilization, and to the extirpation of the institution of slavery.

The doctrine promulgated by President Monroe has been adhered to by all political parties, and I now deem it proper to assert the equally important principle that hereafter no territory on this continent shall be regarded as subject of transfer to a Euro pean power.

The Government of San Domingo has voluntarily sought this annexation. It is a weak power, numbering probably less than 120,000 souls, and yet possessing one of the richest territories under the sun, capable of supporting a population of 10,000,000 people in luxury. The people of San Domingo are not capable of maintaining themselves in their present condition, and must look for outside support.

They yearn for the protection of our free institutions and laws, our progress and civilization. Shall we refuse them?

I have information which I believe reliable that a European power stands ready now to offer $2,000,000 for the possession of Samana Bay alone. If refused by us, with what grace can we prevent a foreign power from attempting to secure the prize?

The acquisition of San Domingo is desirable because of its geographical position. It commands the entrance to the Caribbean Sea and the Isthmus transit of commerce. It possesses the richest soil, best and most capacious harbors, most salubrious climate , and the most valuable products of the forests, mine, and soil of any of the West India Islands. Its possession by us will in a few years build up a coastwise commerce of immense magnitude, which will go far toward restoring to us our lost merchant mari ne. It will give to us those articles which we consume so largely and do not produce, thus equalizing our exports and imports.

In case of foreign war it will give us command of all the islands referred to, and thus prevent an enemy from ever again possessing himself of rendezvous upon our very coast.

At present our coast trade between the States bordering on the Atlantic and those bordering on the Gulf of Mexico is cut into by the Bahamas and the Antilles. Twice we must, as it were, pass through foreign countries to get by sea from Georgia to the wes t coast of Florida.

San Domingo, with a stable government, under which her immense resources can be developed, will give remunerative wages to tens of thousands of laborers not now on the island.

This labor will take advantage of every available means of transportation to abandon the adjacent islands and seek the blessings of freedom and its sequence -- each inhabitant receiving the reward of his own labor. Porto Rico and Cuba will have to abolis h slavery, as a measure of self-preservation to retain their laborers.

San Domingo will become a large consumer of the products of Northern farms and manufactories. The cheap rate at which her citizens can be furnished with food, tools, and machinery will make it necessary that the contiguous islands should have the same ad vantages in order to compete in the production of sugar, coffee, tobacco, tropical fruits, etc. This will open to us a still wider market for our products.

The production of our own supply of these articles will cut off more than one hundred millions of our annual imports, besides largely increasing our exports. With such a picture it is easy to see how our large debt abroad is ultimately to be extinguished . With a balance of trade against us (including interest on bonds held by foreigners and money spent by our citizens traveling in foreign lands) equal to the entire yield of the precious metals in this country, it is not so easy to see how this result i s to be otherwise accomplished.

The acquisition of San Domingo is an adherence to the "Monroe doctrine;" it is a measure of national protection; it is asserting our just claim to a controlling influence over the great commercial traffic soon to flow from east to west by the way of the Isthmus of Darien; it is to build up our merchant marine; it is to furnish new markets for the products of our farms, shops, and manufactories; it is to make slavery insupportable in Cuba and Porto Rico at once and ultimately so in Brazil; it is to settl e the unhappy condition of Cuba, and end an exterminating conflict; it is to provide honest means of paying our honest debts, without overtaxing the people; it is to furnish our citizens with the necessaries of everyday life at cheaper rates than ever be fore; and it is, in fine, a rapid stride toward that greatness which the intelligence, industry, and enterprise of the citizens of the United States entitle this country to assume among nations."

Posted by A. Mattson 0 comments