During the Revolution in the New World, there was a group of people of did not agree with the loyalist. There were mobs throughout the colonies. "At Worchester, a mob of about five thousand collected, prevented the court of Common Pleas from sitting and all drawn up in two files, compelled the judges, sheriffs, and gentlemen of the bar, passed them with cap in hand, and read their disavowal of holding courts under the new acts of parliament, not less than thirty times in their procession." People who were loyal to the King and obeyed his laws, have behaved in such a manner of quietness and peace. And for that exact reason that have been deprived of their rights and liberties. Because of their loyalty to the King they were targeted by the mob and riots. These people wanted to become a new nation of its own not apart of the British colonies.

Declaration of The Causes and Necessity of Taking Up Arms 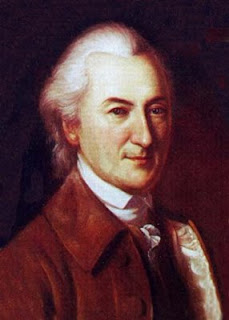 The Declaration of The Causes and Necessity of Taking Up Arms was drawn up by Jefferson and Dickinson in 1775. It justifies as to why the colonies had fought against them in The American Revolutionary War and their complaints on how the colonies are treated. It goes into detail to remark the forceful and ruthless manner Great Britain rules as a sovereign and issues such as taxation wihtout representation and the intolerable acts. Dickinson and Jefferson explain that they do not wish to separate from Great Britain yet, but that the lack of representation in parliament the colonies have is not going to be tolerated any longer. It also depicts the colonies readiness to fight for their freedom and voice in parliament as well as take up arms once more if this issue is not resolved soon.

Men and women were also viewed unequal in the Puritan society. As quoted, "Puritans shared the patriarchal assumptions of all early settlers that men were superior to women and that property-owning men should exercise authority over the members of their families, which included their wives, children, and any servants or other dependents living with them" (Who Built America, 116). This means that men were considered above women and had more rights. This is important because women who tried to speak their thoughts about society and unequally were thrown out of Massachusetts. As stated in wikipedia, The words of the Bible, as they interpreted them, were the origin of many Puritan cultural ideals, especially regarding the roles of men and women in the community. While both sexes carried the stain of original sin, for a girl, original sin suggested more than the roster of Puritan character flaws." 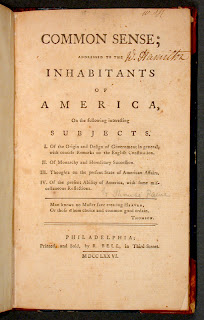 Thomas Paine was a moral philosopher who wrote "Common sense" which was the most popular publication of the 18th Century and the theory that fueled the American War of Independence. In his work, he explains that America should be independent against British rule and all men are equal at creation and therefore there should be no distinction between kings and subjects. He also states limiting the powers of the king sufficiently would ensure that the realm would remain lawful rather than easily become tyrannical. He ultimately wanted America to become a free nation.

Two quotes that were interesting:
-"Yet that we may not appear to be defective even in earthly honors, let a day be solemnly set apart for proclaiming the charter; let it be brought forth placed on the divine law, the word of God; let a crown be placed thereon, by which the world may know, that so far as we approve of monarchy, that in America the law is king. For as in absolute governments the king is law, so in free countries the law ought to be king; and there ought to be no other."
-"In short, monarchy and succession have laid (not this or that kingdom only) but the world in blood and ashes. 'Tis a form of government which the word of God bears testimony against, and blood will attend it."

As time progressed, thoughts of the Enlightenment became more widespread. As a result, human beings were seen in a more positive light, and the idea of natural law became more and more popular. Algernon Sidney, a philosopher of the late 1600's wrote in his Discourses Concerning Government that "man is naturally free; that he connot justly be deprived of that liberty without cause, and that he doth not resign it, or any part of it, unless it be in consideration of a greater good, which he proposes to himself." This is basically saying that all humans are born with certain rights. Nobody and nothing has the right to violate them, unless for the greater good of the society, as agreed upon by the individual himself. Jonathan Mayhew was a miniter in Massachusetts. His sermon entitled "Discourse Concerning Unlimited Submission and Non-Resistance to High Power", delivered in 1750, futher elaborated upon these points, in addition, he linked them to the church. He basically stated that everything done by the government should be for the good of the people that they govern. If this is not the case, the people then have the right to rebel or object their authority. He also makes mention of the fact that God doesn't prohibit opposition to those with authority who don't govern with the general welfare of their people in mind. 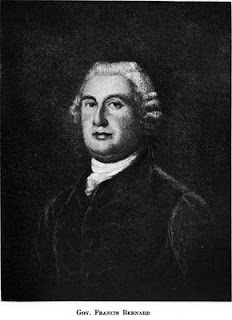 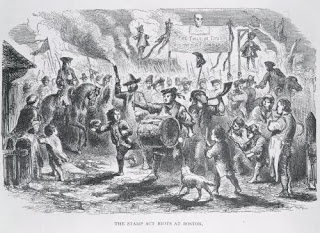 Why was there a riot in Boston? The Stamp Act, passed on March 22, 1965, was all to blame. The people of Boston were furious and according to Governer Francis Bernard they had a very good way of showing it. An Effigy representing Mr. Oliver, the new Office of Stamp Distributor, was found hanging on a tree. The mob then tore down the Stamp Office, that was currently under construction and then the Effigy was then taken to Mr. Oliver's house and beheaded.

When Thomas Jefferson wrote The Declaration of Independence, at first it initially included a small excerpt ( which is shown below) that complained about King George III and his mistreatment of people and their natural human rights. The particular part of the document talks about slavery and how it is a defiance to rights of life and liberty. He's supposed to be a Christian, a man of God, the king whose divine right to rule was given to him from the heavens above, however he allows slavery. It makes him seem disbelieving to belong to any religion, does it? Slavery isn't a crime according to the government. Yet to Thomas Jefferson, it's as if to say that slaves aren't humans.

The excerpt was removed from the Declaration of Independence however when the two colonies Georgia and South Carolina refused to sign if that area was to remain in the document. Coincidental, perhaps? Very. In the 18th century, the Black population of Georgia and South Carolina was exceeding rapidly over the White population. With more rice plantations and farms being made, slaves were serious necessities. So imagine how reading the Declaration of Independence made the representatives of Georgia and South Carolina feel. Slaves meant capital and economic success. Perhaps Georgia and North Carolina feared that if people began to think that slavery was bad according to human rights, then slavery along the lines would have been abolished and then that would cause an economic fall. Also, one can make an opposing comment saying that Jefferson was being hypocritical in that he was a slave owner himself.
Excerpt: He has waged cruel war against human nature itself, violating it’s most sacred rights of life and liberty in the persons of a distant people who never offended him, captivating & carrying them into slavery in another hemisphere, or to incur miserable death in their transportation thither. This piratical warfare, the opprobium of INFIDEL Powers, is the warfare of the CHRISTIAN king of Great Britain. Determined to keep open a market where MEN should be bought & sold, he has prostituted his negative for suppressing every legislative attempt to prohibit or to restrain this execrable commerce. And that this assemblage of horrors might want no fact of distinguished die, he is now exciting those very people to rise in arms among us, and to purchase that liberty of which he has deprived them, by murdering the people on whom he also obtruded them: thus paying off former crimes committed against the LIBERTIES of one people, with crimes which he urges them to commit against the LIVES of another.

On March 22, 1765 the Stamp Act was enforced. However, in October of 1765 the Stamp Act Congress met in New York where they urged the colonies to boycott British goods, causing Parliament to repeal the Stamp Act.
"Popular protest against denial of what the colonists felt to be their rights erupted in many places."
Land that was acquired illegally by aristocrats was now being claimed by its' tenants (named Levellers after the popular party that sprang up during the English Revolution of the 1640s) who farmed the land. When the uproar occurred British troops were called in.
Pendergrast, the chief of the country Levellers, was tried at Poughkeepsie and found guilty of high treason and was sentenced to death. His last words struck me: "That if opposition of the government was deemed rebellion, no member of that court was entitled to set upon his trail."
Ironically enough on December 16th of 1773... 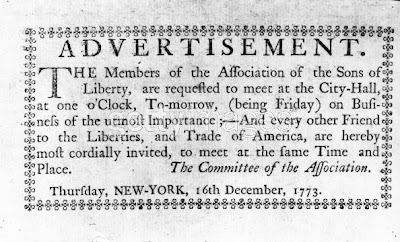