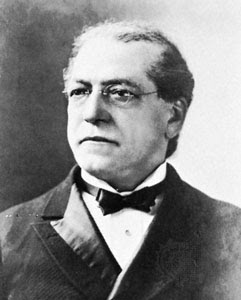 Samuel Gompers was an outspoken advocate of labor reform. His distinctive view of "pure and simple" unionism called for labor movements to concentrate on "concrete, achievable gains" and better organization of specific workforces (Henretta, 496). His strategic genius and call for structure resulted in him becoming "the first and longest serving president of the American Federation of Labor (AFL)".
Samuel Gomper recalls the events that helped shape his opinion on unions in his writings titled "Chapter V: I Learn the Weakness of Radical Tactics ". In this passage he describes, first hand the events surrounding and leading up to the explosion of violence and police brutality against union movements at Tompkins Square in New York City. In his denouncing of radical tactics Gomper states:

"I saw how professions of radicalism and sensationalism concentrated on all the forces of organized society against a labor movement and nullified in advance normal, neccessary activity. I saw the leadership in the labor movement could be safely entrusted only to those into whose hearts and minds had been woven the experiences of earning their bread by daily labor. I saw the betterment of workingmen must come primarily through workingmen. I saw the danger of entangling alliances with intellectuals who did not understand that to experiment with the labor movement was to experiment with human life."
This quote identifies the key flaws in the early labor movement including division, untrustworthy and "out of touch" leadership as well as the public disdain for radical tactics. His analysis proved true for the labor movements of the 19th century, as well as social movements that have taken place throughout history.