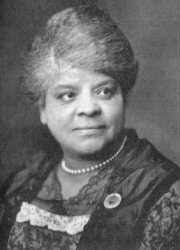 Ida Wells-Barnett can be applauded just for the fact that at the time of oppression against African- Americans, and women in the early 20th century she is credited for "enlightening the nation and the world about the powerful connection between lynching, patriarchy, racism, and cultural notions of white womanhood and black sexuality."

In her piece entitled "Lynch Law in America", Wells-Barnett attacks the social acceptance of lynch laws. With the rise of racist organizations such as the "red shirts' and the Ku Klux Klan the torturing and murdering of African Americans had become a trademark of the legal system. Wells-Barnett explains how this "unwritten law is not attributed solely to the South, but is actually a national injustice.

As her case against lynch laws progress Wells-Barnett displays how lynching is almost unavoidable.

"If a few barns were burned some colored man was killed to stop it. If a colored man resented the imposition of a white man and the two came to blows, the colored man had to die, either at the hands of the white man then and there or later at the hands of a mob that speedily gathered. If he showed a spirit of courageous manhood he was hanged for his pains, and the killing was justified by the declaration that he was a "saucy nigger." Colored women have been murdered because the refused to tell mobs where relatives could be found for lynching."

Wells-Barnetts' piece was written in 1900, thirty-years after the passage of the 15th amendment which guaranteed the right to vote as well as citizenship of the African-American population. With that amendment ratified, it meant that African American citizens were protected under the same federal laws as white citizens. Furthermore the Bill of Rights fully applied to all African-Americans. Lynch laws violate the Fifth amendment which guarantees due process, the Sixth amendment which guarantees trial by jury, and the Eighth amendment of cruel and unusual punishment. Ida Wells-Barnett also describes instances where the Fourth amendment of unwarranted search and seizure as well as the Seventh amendment of civil trial by jury had been violated. Even more distressing is the instances in which Wells-Barnett describes how witnesses, or family members, individuals who were guilty of no crime were murdered because the refuse to answer unlawful questioning.
The execution of completely Innocent bystanders, even children is exemplified in Wells-Barnett's story of a boy and girl executed, for no offense at all.
"In the case of the boy and girl above referred to, their father, named Hastings, was accused of murder of a white man. His fourteen-year-old daughter and sixteen-year-old son were hanged and their bodies filled with bullets; then the father was also lynched."
As I continued to read the article I was amazed at how the claims of white woman were openly accepted in so many cases. Wells-Barnett explains the popularity of white woman making unjustified claims predominately against black men. Sometimes it appears, due to the fact that they had been caught in an interracial relationship, had made false claims to protect themselves. I find this particularly interesting because it was common for the courts to disregard a woman's testimony in the court system without any male witnesses, especially in cases of rape.
Overall it appears that these lynching laws were prime examples of the horrors that can occur when a mob mentality dominates groups of people. I believe this period of time, will always be shamefully remembered on the pages of American History.