When the slaves were emancipated after the civil war, Southern communities were discontent with this, so they passed "black codes" in order to maintain control of black citizens. Mississippi and South Carolina were the first states to pass these regulations. Later, other states followed.

"Section 2. Be it further ordained, That every negro who shall be found absent from the residence of his employer after 10 o'clock at night, without a written permit from his employer, shall pay a fine of five dollars, or in default thereof, shall be compelled to work five days on the public road, or suffer corporeal punishment as hereinafter provided."

The quote is important because it shows that these regulations did not allow freedmen to move around freely as they please. They were subject to as much oversight, authority, and supervision as possible.

"Section 13. Be it further ordained, That all sums collected from the aforesaid fines shall be immediately handed over to the parish treasurer."

"Section 5. Be it further ordained, That no public meetings or congregations of negroes shall be allowed within said parish after sunset;" and Section 6 prohibited "declaim to congregation fo colored people."

These are important parts of quotes because they showed that African American social and political organizations were feared. When united, they posed as a threat to White authority and order. 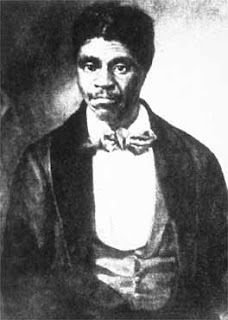 In the vein of a southern controlled federal government, the case of Dred Scott V. Sanford resulted in a decision against the slave Dred Scott, and set a precedent later overturned by the 14th Amendment. Dred Scott, was a slave who attempted to sue his master for his own freedom but the vote resulted in a 7 to 2 tally, against Scott. The precedent stated that Congress has no authority to prohibit slavery in Federal territories and by extension, no slaves have the right to sue due to their not being citizens of the United States. This concept of Dred Scott not being a citizen was derived from the Constitution, specifically, the 3/5th's clause or compromise. This case was one of the many events that created tension between abolitionists and slave owners, which eventually lead to the Civil War.

The Drummer of Antietam

The ballad speaks about a drummer boy who meets his fate with death, among hundreds of soldiers who are dead as well, at the battle of Antietam. The Battle of Antietam was a 2 day long fight that occurred between the days of September 16 and September 18, 1862, although most of the battle took place on September 17th. It is considered one of the bloodiest single-day battles of the Civil War because no matter how hard the Union attacked,the Confederates would match their attacks equally even though the ratio of the troops were about two to one; there were about 23,000 casualties. As close as the battle seemed, the Union won the battle.

"The Wound Dresser" by Walt Whitman

Walt Whitman was known as the "Poet of Democracy." In 1855 he published his first edition of Leaves of Grass, a book of poems; he continued to publish throughout 1892, completing nine successive editions.

"During 1862 Whitman left Brooklyn to search for his brother George who was listed as missing after the Battle of Fredericksburg. Shocked by the plight of the wounded in Washington’s military hospitals, Walt secured a Civil Service post and, in his spare time, made nearly 600 hospital visits. These visits provided ample material for The Wound Dresser."

[Excerpt for The Wound Dresser by Walt Whitman]

Bearing the bandages, water and sponge,
Straight and swift to my wounded I go,
Where they lie on the ground, after the battle brought in;
Where their priceless blood reddens the grass, the ground;
Or to the rows of the hospital tent, or under the roof'd hospital;
To the long rows of cots, up and down, each side, I return;
To each and all, one after another, I draw near--not one do I miss;
An attendant follows, holding a tray--he carries a refuse pail,
Soon to be fill'd with clotted rags and blood, emptied and fill'd
again.
I onward go, I stop,
With hinged knees and steady hand, to dress wounds;
I am firm with each--the pangs are sharp, yet unavoidable;
One turns to me his appealing eyes--(poor boy! I never knew you,
Yet I think I could not refuse this moment to die for you, if that
would save you.)

Walt Whitman decided to write his poem on the Civil war, from the perspective of a wound dresser; this aspect of the poem is very important. Because he does this, he shifts the focus from the heroic and courageous aspects of war to the suffering of the wounded. This shift of focus is evident in the second stanza, which states "many the hardships, few the joys, yet I was content." This focus on the less courageous aspects of war substantiates Whitman's determination to confront poetry with a "rude American tongue." He is not afraid to delve into war's horrific aspects such as the "amputated hand" or the "putrid gangrene." We clearly see Whitman's social democrat traits in this poem.