Booker T. Washington, Up From Slavery and 1895 Slave Exposition 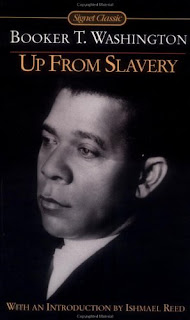 Booker T. Washington renowned educator, author and African-American leader released his autobiographical classic Up From Slavery in 1902. While undoubtedly a historic figure in American History Washington was also controversial, one criticized aspect of him was his stance on labor and black-white relations. In chapter 10 of Up From Slavery titled “A Harder Task Than Making Bricks Without Straw” Washington delves deeper into his thoughts on labor. Washington believed that it was essential for blacks to learn a trade rather than to indulge in literary academics. The belief of teaching students labor is written in the beginning of the chapter when Booker T. writes


“My plan was to have them, while performing this service, taught the latest and best methods of labor, so that the school would not only get the benefit of their efforts, but the students themselves would be taught to see not only utility in labor, but beauty and dignity, would be taught, in fact, how to lift labor up from mere drudgery and toil, and would learn to love work for its own sake. My plan was not to teach them to work in the old way but to show them how to make the forces of nature—air, water, steam, electricity, horse-power --- assist them in labor” – Booker T. Washington


Washington had students construct the Institutes many buildings and while many opposed this idea of having inexperienced students work construction the plan never changed. Washington felt the experience of building was essential for the student.  Washington believed that an emphasis on labor would better prepare black people to contribute to their respective communities immediately and more effectively than book knowledge, Washington wrote that


“The actual sight of a first class house that a Negro has built is ten times more potent than pages of discussion about a house that he ought to build, or perhaps could build.


There was much controversy however on Washington’s firm stance on the importance of labor to the advancement of black people. Many parents who sent their children to Tuskegee Institute were against the idea of their child predominantly being taught various trades of labor. Most likely this belief stemmed from slavery being abolished only abolished 37 years before, with the overall majority of slaves not being permitted and only knowing labor it is understandable why they would be opposed to idea of sending their student to school to do more labor. Washington writes on this matter and subtly criticizes the parents decision


“Most of the new student brought a written or a verbal request from their parents to the effect that they wanted their children taught nothing but books. The more books, the larger they were, and the longer the titles printed upon them, the better pleased the students and their parents seemed to be”

On September 18th, 1895 Booker T. Washington delivered his historical Atlanta Exposition speech. The speech is considered one of his most acclaimed achievements. Booker T. Washington is generally celebrated for being the keynote speaker and delivering an historic speech, there some controversy. Most famously W.E.B DuBois but through out history there has been much discussion concerning ’s message. DuBois like other critics felt that compromised to much especially considering that slavery had just ended 30 years before that. One quote that may have given critics this belief is

“As we have proved our loyalty to you in the past, in nursing your children, watching by the sick-bed of your mothers and fathers, and often following them with tear-dimmed eyes to their graves, so in the future, in our humble way, we shall stand by you with a devotion that no foreigner can approach, ready to lay down our lives,”

This one quote good be used as the basis of the criticism, it describes slavery in a very peaceful and friendly way. Also the part about devotion most likely was also a trigger, to suggest black people should have devotion towards white people so soon after slavery and with segregation and civil rights still major social issues it would be seen as insensitive to black people.. Booker T. also spoke of how if blacks did not collaborate with whites they were aiding in the destruction of . Booker T. says

“Nearly sixteen millions of hands will aid you in pulling the load upward, or they will pull against you the load downward.”