If raised in this country, when in grade school, you were taught about Christopher Columbus, the celebrated explorer who "discovered" the great country we call America. At first mention, one may picture Columbus towering over his three famous hsips, compass in hand. Columbus thought he found a route to India, truly stumbled upon America, and as a result, great cultual exchange took place. As you get older and transition into middle school and high school, you may then begin to learn that Columbus slightly exposed Natives, took their land, and caused wide spread disease among them, which lead to their decline.
Now that I am in college, I was exposed to Howard Zinn's "Columbus, The Indians, and Human Progress." Zinn attempts to enlighten readers about the WHOLE truth concering Columbus and his voyage by providing primary resources from Columbus' own journal. Zinn himself is well aware of the fact that one rarely ever uncovers the entire story; this is his stab at doing so. Howard Zinn is a very educated man that attended Columbia University. Although he did obtain a Ph.D in history, he knew barely any of the facts that he brought to light before doing intense research for his piece. It is said in "Columbus, the Indians, and Human Progress" that Columbus and the Europeans exposed Native Americans to violence, slavery, and even rape. His main motives were greed and he did his best to achieve it at any means.
While not exposing the whole truth, but rather only the optimistic side I understand is more appropriatefor young children however, once middle school is reached, I do think that students should be more exposed to the whole truth about our country and how we came to be. We, as people, are only as smart as what we know. Is concealing a part of out truth restricting us? In my opinion, it is. After reading Howard Zinn's writings, I became even more aware of the power of the media. Not only does it posses the power to expose us, it posses the power to limit us.

Who is Christopher Columbus? 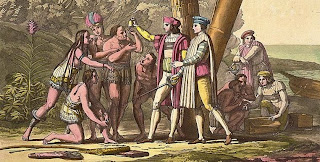 When you think of an explorer from the 15th century, or from any era, you would think of a brave, courageous, and respectful man. What about a man that discovers a new country? I would assume that a person with such an immense discovery would appreciate the beauty of the new environment and admire the way the natives lived with one another so peacefully. Instead Christopher Columbus saw this as too primitive and thought they would make great servants.

This was not the story I was told as a child. I thought Christopher Columbus was an honorable man, who did great things in his life. He made the biggest discovery of his time, but events that occurred following his discovery were not as noble.
Washington Irving tries to make up for the atrocities that occurred under Columbus's rule by saying that "he sought to colonize and and cultivate them, to civilize the natives, to build cities... and thus to found regular and prosperous empires." Why would someone want to build cities when the Aztec culture already had cities of their own? And according to Howard Zinn, Columbus writes in one of his letters about the Native Americans, "they are very simple and honest...they exhibit great love towards all others...they would make great servants." Why would a great explorer want to enslave such great people? Now Christopher Columbus a completely new person to me, not only did he discover The Americas, but he was also responsible for the disappearance of so many Native Americans.

The Fallacy of Columbus

As a child we learn about our country's commitment to social justice; we are taught to treat each other equally; most simplistically we are taught "sharing is caring." In our elementary schools Columbus is taught to be a hero, a role model for a child; he was not only a man but, a myth. We are taught that his discovery of the Americas was peaceful, and that "his conduct was characterized by the grandeur of his views and the magnanimity of his spirit" (Irving 193). However Columbus was quite the opposite. He was not "keenly sensible to injury and injustice" (Irving 193). Rather, he created a "ghastly system" in America to produce gold for export (Zinn,203). He would torture the Natives and have them sold as slaves for his own benefit, they were no longer human to him, but property.

The natives were "rounded up," like cattle and sent on a "voyage across the Atlantic. Two hundred [of five hundred] died on the way, of cold, of sickness (Zinn, 203)." This is the simple truth of Columbus supposedly one of the greatest 'heroes' in history.
Zinn, H.(1993).Columbus, the indians, and human progress.
Irving, W.(1879).Character of Columbus.

Can you handle the truth?

As I was reading Howard Zinn's The People's History: Columbus, Indians, and Human Progress, I, among others who have been taught the Christopher Columbus story the "PG" way, was more than entirely shocked by the content that filled the chapter. At first, I felt indifferent about the story, however the more I read on, the more I felt like saying "This can't be. How could he write these lies?" Unfortunately for me, so did others who felt the same way I did. I had to stop and think about how afraid I was about finding about the truth behind "the discovery". It really couldn't have been peaches and cream with finding the Americas. Better yet, the islands because he didn't even find North or South. It just irks me how America just changes around the stories of history, with the fear that the people will find out the naked truth. Although I'm sure people know that there are many skeletons lying in America's closet. This was just one of them.

Is Christopher Columbus considered a hero or a murderer? Columbus is considered a hero in most history textbooks because we are taught the basics. "Columbus was a man of great and inventive genius" (Irving 192). However, he is also considered a murderer. "...children thrown to dogs to be devoured, newborn babies born to women prisoners flung into the jungle to die..." (Zinn 204). Columbus tortured Natives and killed several. Indians were treated as slaves and were forced to work for Columbus. He made sure that the Indians were never in control and sent our several warnings to prove it; cutting off an innocent Native's hand to send out a message. Not only were Columbus and his men cruel, but always made sure they had the upper hand in the battle.

Relevant to the misconceptions that have been taught regarding Columbus, the story of Rosa Parks is no different. Everyone's heard the story of Rosa Parks as an elderly woman who courageously took a stand for her rights on a bus in Montgomery, Alabama. However, this is not the full, true story. The first person to refuse a white man their seat on a bus was Claudette Colvin. She was a fifteen year old girl who refused to move on a bus. Colvin's name had not been widely known during the Civil Rights movement due to the fact that she wasn't considered an acceptable example for the movement. Colvin's skin was a very dark shade and she became pregnant with a married man's baby. A tired, elderly woman sets forth an example whom the public could sympathize with much easier.

Every year we recognize Christopher Columbus for discovering America. We're even off from school for "Columbus Day." But who really "discovered" America? What does it mean to "discover?" It becomes clear after reading Howard Zinn's "Columbus, the Indians, and Human Progess" that the idea Columbus discovered America is questionable.  Elementaty school textbooks portray Columbus as being a "good guy" because as a nation we don't want young children to be afraid of the violence and bloodshed, but we also don't want to signal the message that "bad people" get holidays named after them. But at at the expense of not telling children this, they are believing lies. Why not tell the history in a way that is not frightening to children ,but does not falsify the history in any way, like the teachers on pg207 suggest?

The book  "Lies my teacher told me" by James W. Loewen explores the countless number of lies and cultural bias' of an American textbook. Loewen's makes a crucial point that "Many of the textbooks tell of Columbus's three later voyages, but most do not find the space to tell us how Columbus treated the the land and the people he discovered"  (pg 53)

In addition to Columbus' story being culturally bias, there are so many more. Thomas Jefferson fathered a black child with a plantation slave (Sally Hemings). However, textbooks often fails to list the child Jefferson had the Hemings, probably, because she was partly black. Is it a coincidence that there is so frequently so little focus on minorities in textbooks, and that it's so rare to hear about flaws in American "heroes"?

Perhaps racism in textbooks is born out of fear. Fear of losing land. Fear of losing a sense of superiority. Fear of admitting the truth. Columbus DID have the courage to explore the world, WAS first to have a written history of the new world, and did discover the new world for Europeans. However, leaving the Native Americans out of the prior history doesn't seem ethical. It almost seems racist because by saying Columbus "discovered" America (and nobody else was involved), you are asserting that Native Americans who were here first either weren't people, or were an inferior race.

All we learn about Columbus is that in 1492 he sailed the ocean blue. We are taught that he found and explored America but what we don't learn about is what he did to the native people. Columbus first writes in his journal "They do not bear arms, and do not know them for I showed them a sword-they took it by the edge and cut themselves." (Zinn, page 202) Then he writes "They would make fine servants. With fifty men we could subjugate them all and make them do whatever we want." (Zinn, page 202) Columbus is fully aware these "Indians" are not hostile or dangerous in any way but he still decides to torture and murder these pe