At the beginning of the 20th Century, a new way of thinking was taking shape. With the rapid development of industries and large factories, the need for laborers would become an urgent demand. Unfortunately the conditions that these workers faced would start an uproar in the media. These journalists told the drastic truth of the corruption in our business industry and political government. Muckrakers was the name these reporters were given.

Lincoln Steffen's " The shame of the cities" 1904, became a series of articles
for Mc Clure's Magazine. Also W. T. Stead " If Christ came to Chicago" and Upton Sinclair's " The Jungle" boldly uncovered the terrible conditions that workers dealt with during the Industrial Revolution. Men like these men mentioned changed the course of the way people would think about how the food industry was an unsafe haven. These were the many answers to causes of disease and death in the early 1900's. These unsanitary conditions would make way for the Pure Food and Drug Act.

The Pure Food and Drug Act of is federal law that dictates inspection of meat products and prohibits the manufacturing, sale, or transportation of tainted and/or posionous food products. The law begain as a result of public speaking through Muckrakers like the men mentioned in this blog. 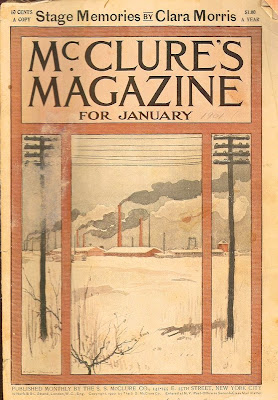 McClure's Magazine was an illustrated publication created at the turn of the 20th century
It was started by S. S. McClure and John Sanborn Phillips. The magazine featured political and literary content. It published books that were in the process of being written, a chapter at a time. The magazine contained a great deal of muckraking journalism.