Amos Kendall was an American journalist who wrote the most influential western papers such as Abolition Mail. In this piece he writes about how the fact that Anti-slavery publications are being rejected in the south. He also believed that the post master general has no right to "exclude from the mails any species of newspaper, magazines, or pamphlets." He also states that the newspapers produced in the south are pure propaganda and he encourages those papers to be stopped.
One interesting quote
When states become independent "they acquired a right to prohibit the circulation of papers within their territory; and their power over the subject of slavery and all its incidents, was in no degree diminished by the adoption of the federal constitution." 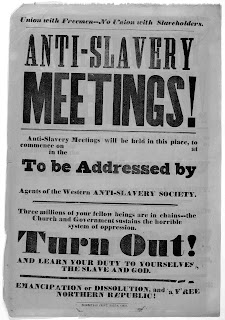 When we analyze the transcript of the Ripley Anti-Slavery society meetings, we see that this abolitionist group has many elements that make it a prime example of anti slavery groups from this time. We know that many of the anti slavery groups were supported by those who attended church, and used the Bible as a piece that condemns the act of slavery. We see the faithfulness reflected in how the meetings in this group begin with a prayer, and how they incorporate the bible into their anti slavery politics. What's also interesting about this piece is how we see foreshadowing for the years to come and the eventual secession of the southern states, despite the anti slavery group's attempts to avoid such an event.

What to the Slave Is the Fourth of July?

What to the Slave Is the Fourth of July?
Frederick Douglass
Frederick Douglass was a famous 19th century abolitionist writer who escaped from slavery and lived to speak about his experiences. In his piece, "What to the Slave Is the Fourth of July", Douglass is explaining that the Fourth of July was by no means a positive and productive day for the slaves. In his opinion, America was not free because if this was true, there would be no more slavery, prejudice, or discrimination against African Americans. The quote that I picked out was the last few words in the document stating "America reigns without a rival". Basically, this quote is saying that no matter who you compare America to, the practices of this nation are far worse. This quote is interesting to me because Fredrick Douglass is expressing his anger towards America.

The Case For Salvery 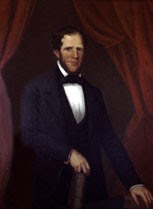 The Fallacy of the Bible Argument:
Christianity forbids Slavery

o But, there is nothing in the Old or New Testament that which would go to show that slavery, when once introduced, ought to all events to be abrogated, or that the master commits any offense in holding slaves.

o But, the children of Israel themselves were slave holders , and were nver condemned for it

During the 1830’s abolitionists strived to influence all Americans into ending slavery. A large part of their influence was gained through propaganda, which was visible throughout the country. The South Carolina Resolutions on Abolitionist Propaganda was written December 16, 1835 and it lists the various acts and resolutions established in the state of South Carolina to eliminate the abolitionist’s propaganda. “…most of the states south of Virginia provided severe penalties for printing or speaking anything that might incite insurrection among the slaves, or even for arguing against the institution of slavery.” (280)

The first resolution states that any formation of abolition societies, and acts and doings by abolitionists are “in direct violation of the obligations of the compact of the union”.

The second resolution asserts that a country with true concern for its peace and security will not accept abolition societies without either protesting, surrendering or compromising its rights.

The third resolution requests that the Legislature of South Caroline will suppress all abolition associations and neighboring abolitionist states by penalizing them when propaganda is printed, published, or distributed to newspapers, in order to “excite the slaves of the southern states to insurrection and revolt.”

The fourth resolution emphasizes that each southern state has exclusive control over domestic slavery, and thus no state should interfere by creating propaganda.

The fifth resolution reasserts that “non-slaveholding states are requested to disclaim by legislative declaration, to interfere in any manner with domestic slavery, either in the states, or in territories where it exists.”

The sixth resolution solicits abolition of slavery in the District of Colombia as “a violation of the rights of the citizens in that District”. This resolution invites the citizens of South Caroline to be careful with its government leaders in order for their rights to not be violated.

The last resolution affirms that the legislature of South Carolina has increased its measures of security in the Post Office Department of the United States in order to prevent the United States mail to become a “vehicle for the transmission of the mischievous documents [propaganda]” If this resolution is not fulfilled, Chief Magistrate of the state affirms measures will be taken to “prevent [propaganda] traversing the territory”

William Lloyd Garrison published The Liberator at the age of twenty six and wrote a cover page on the first edition of the paper to state its purpose. He speaks with determination and resilience. The author portrays his energy and the efforts he is going to put forth to end slavery. Garrison also cited the Declaration of Independence and the hypocrisy of its equality of all people.